28 February 2021 - This website is for demonstration purposes only. Any enquiries submitted will be not be responded to. 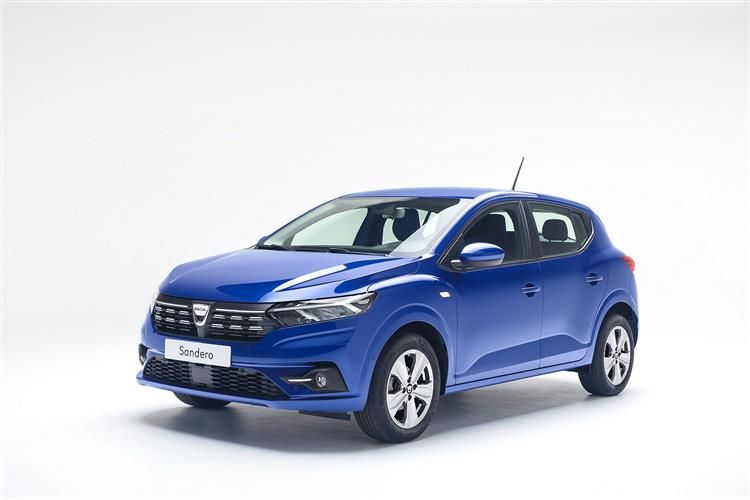 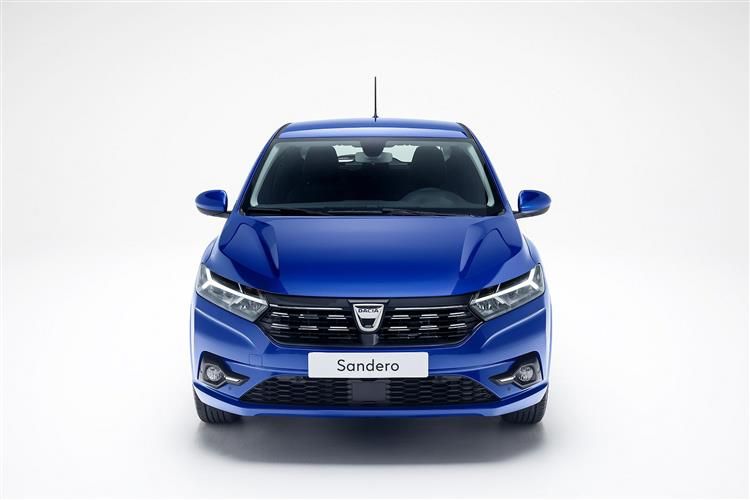 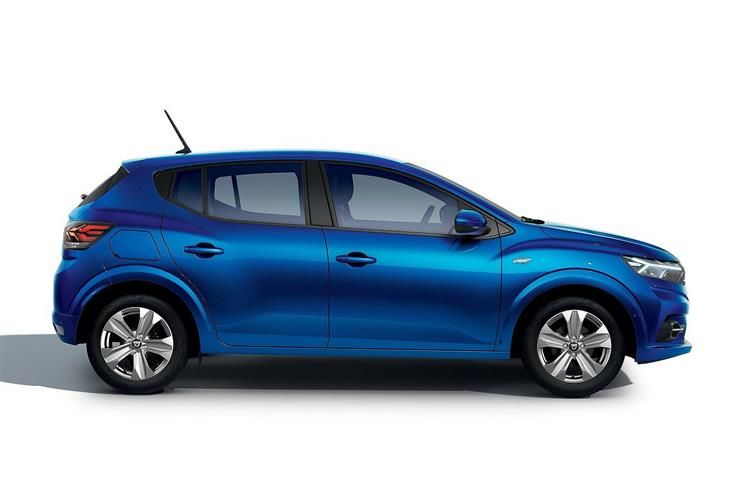 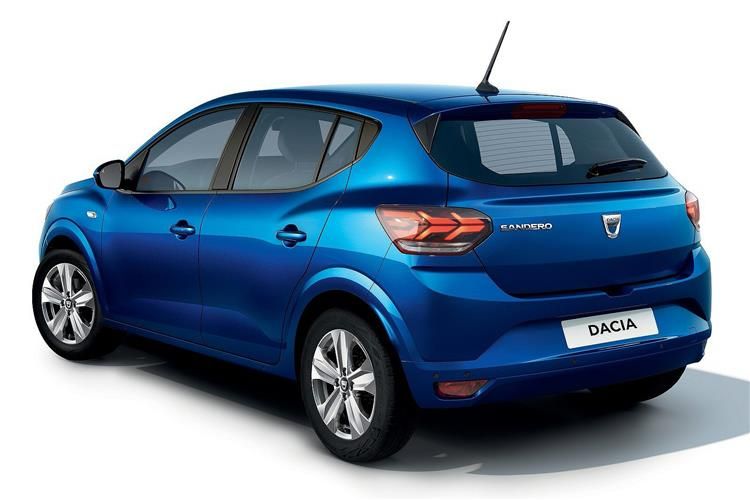 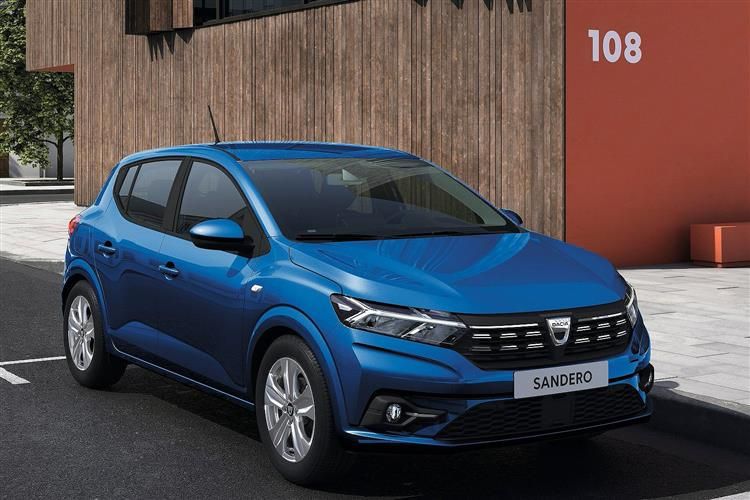 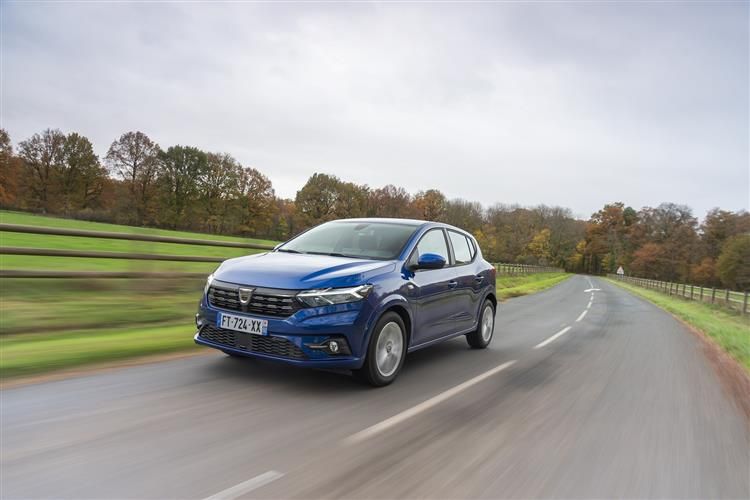 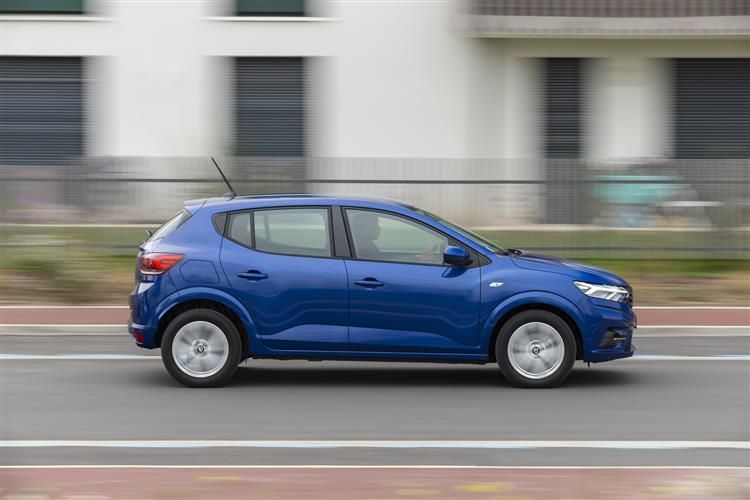 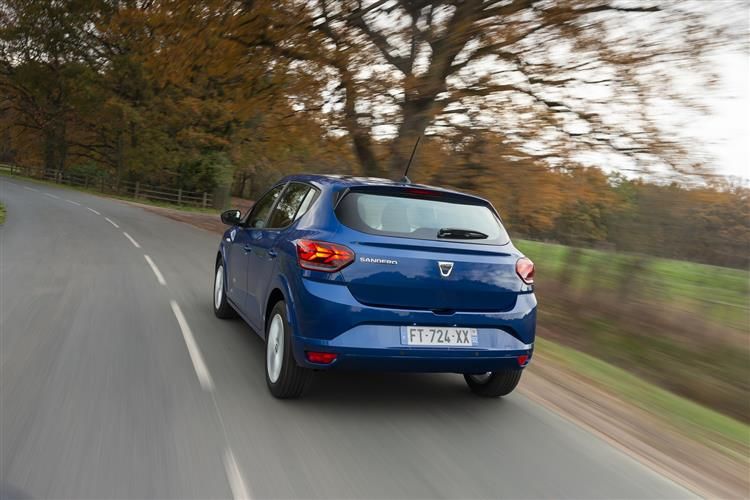 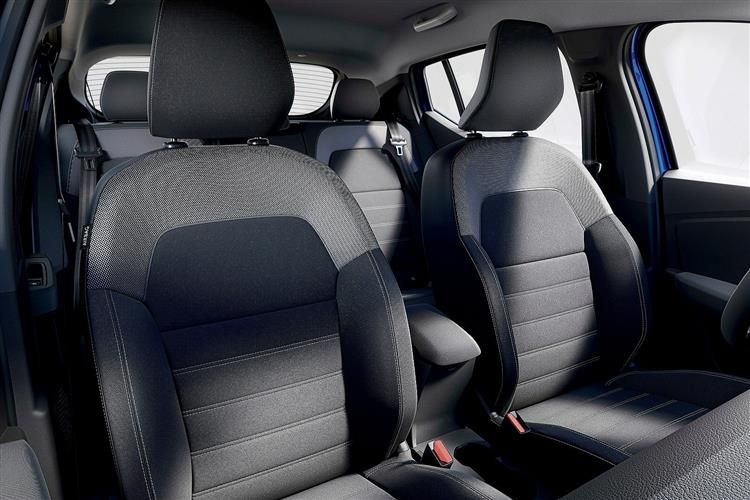 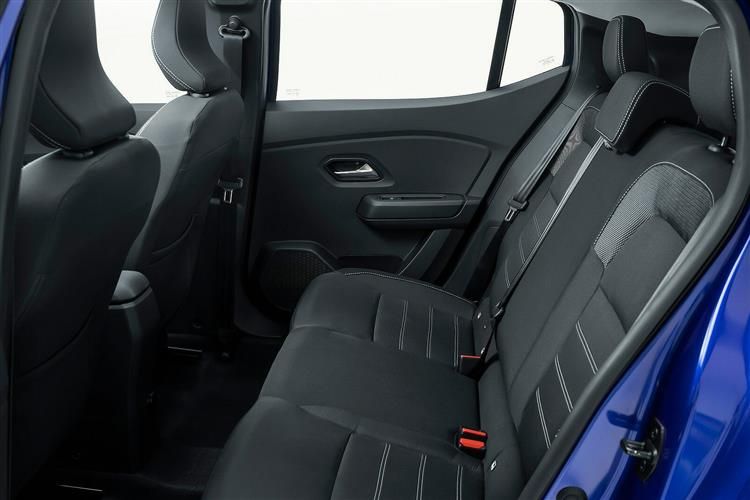 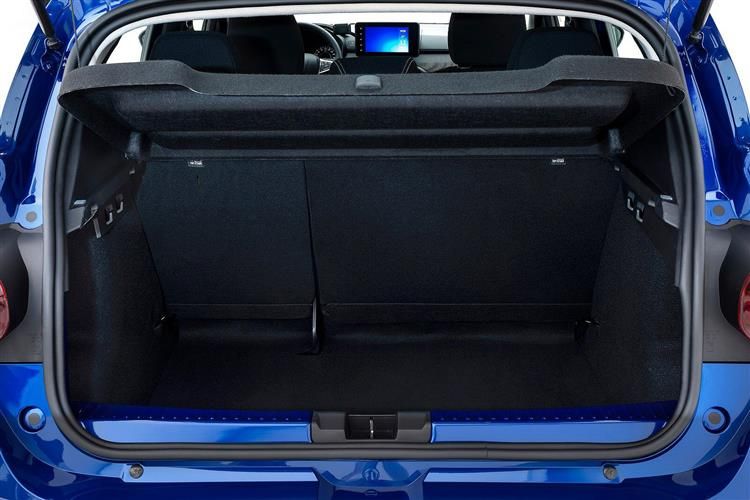 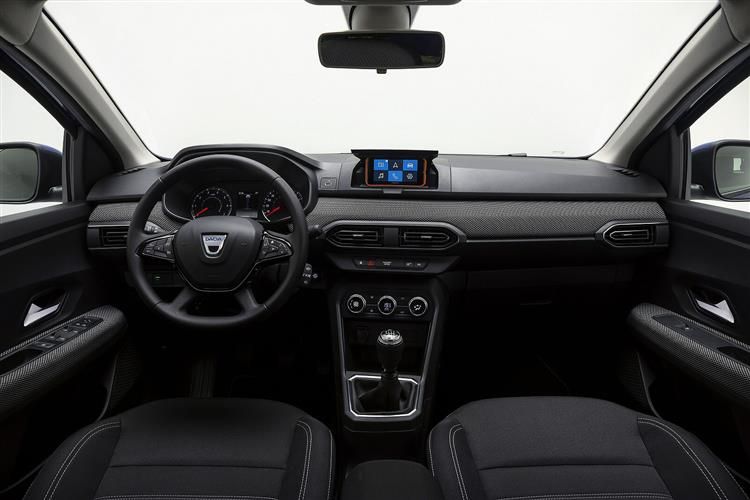 Wouldn't it be good if the Dacia Sandero could feel properly modern as well as being properly cheap. Well, we're promised that this MK3 version is. Really modern that is. It still pretty cheap too - still the cheapest family car you could choose - but at the same time as being a far better quality hatch in this rejuvenated third generation form. If you're just about to buy a mainstream brand city car, supermini or family hatch, you need to stop right here and read on....

From Renault's point of view, it was a great concept. Buy a struggling Romanian car brand using factories with cheap labour. Then take a last-generation Renault hatch design, freshen it up with modern styling and a different badge and sell it at the kind of super-cheap prices that all of these short-cuts could facilitate. So was born the Dacia Sandero in 2013, which was then - and still is now - by some margin Britain's most affordable compact family hatch. With the original version, lightly freshened in 2017, you very much got what you didn't pay for, but loyal owners didn't care. Some of us though, wondered whether this car's sales prospects wouldn't be considerably improved if just a fraction of that affordability could be sacrificed in favour of creating more modern, efficient engineering. In a cabin that didn't feel quite so much like a Bulgarian thrift store. The rather more palatable product we were picturing has arrived. And this is it, the rejuvenated MK3 model.

Owners of the original Sandero model didn't care too much about drive dynamics - which is just as well because they weren't up to much. This MK3 model's stiffer, more sophisticated CMF-B platform means it can deliver a little bit more - and there are some better engines too. The entry-level unit might feel a little feeble though - it's a 1.0-litre three cylinder powerplant producing just 64bhp, badged 'SCe 65' and mated to a five-speed manual gearbox. The Sandero's low pricing though, should mean that you can at least stretch to the powerplant we'd recommend, the 89bhp three cylinder turbo petrol TCe 90 unit, which is available across most trim levels and can be had with either 6-speed manual transmission or a CVT automatic gearbox. Dacia isn't bothering with a diesel this time round, but if you're looking for something super-frugal, you can have the TCe 100 petrol unit in LPG form, with a dual fuel tank situated where the spare wheel would normally sit. With both the petrol and the LPG tanks filled, you'd have a range in this eco-variant of over 800 miles. Dacia promises that all Sanderos will be easier to use around town too, thanks to the fact that the steering is now electrically (rather than hydraulically) assisted and apparently needs up to 36% less effort to turn at low speeds.

Smart looks and an old nail of a platform wouldn't have sufficed for this MK3 model. We've had that with the Sandero before. But that's not what's being served up this time round, the fourth generation version of this car riding on the same CMF-B platform as a far pricier (and smaller) Renault Clio. As before, there are two versions of the single 5-door hatch body shape, the standard model and the high riding crossover-inspired 'Stepway' version, which is slightly more differentiated this time round with flared wheel arches, 16-inch wheels, roof bars, plastic body cladding and body-coloured skid plates. Both Sandero variants are a touch bigger than before, noticeably wider (1,848mm without mirrors) and 19mm longer. The look's less anonymous too, thanks to a Y-shaped LED front lighting signature. Inside, it's much nicer than before, with a more modern dashboard, embellished on plusher models with fabric finishes. Infotainment's taken step forward too, though the base trim level still does without a central screen (there's a smartphone dock and a Dacia in-car app instead). Further up the range, an 8-inch centre monitor features, with smartphone mirroring. Access to the rear is easy, with wide-opening doors and reasonable knee room; you could seat a couple of adults there more comfortably than in most other superminis. The boot's a bit bigger too, rated at 328-litres, which is 18-litres more than the old car could offer.

So how much are you going to end up paying? Believe it or not, from under £8,000. There's a choice of three trim levels, base 'Access', mid-range 'Essential' and plush 'Comfort'. Ideally, you'd want to start your search with 'Essential' spec because 'Access' trim really is very basic. Overall, this Sandero is still the cheapest car you can buy. It undercuts smaller city cars like the Fiat Panda and the Kia Picanto by around £2,000 and offers lots more space inside than both. For some perspective, in size, this car is somewhere between a Fiesta-shaped supermini (models of which tend to be priced from around £13,500) and a Focus-sized family hatch (priced from around £18,000). So you get the idea. It really is hard to argue with this kind of value proposition. There's only a single five-door hatchback body style but it does come in either standard form or as the 'Sandero Stepway', a variant that dresses up this design with a bit more SUV-style attitude and offers a 41mm higher ride height. Three interior media infotainment options are available, the most basic system - called 'Media Control' - includes Bluetooth and a DAB radio, but no screen. Instead, you get a dock for your smartphone which can run a purpose-designed app for in-car use. Further up the range, you get two options based around an 8-inch touchscreen; 'Media Display', which incorporates 'Android Auto' and 'Apple CarPlay' smartphone-mirroring. And 'Media Nav', which has built-in sat nav with Wi-Fi-based smartphone access. Optional extras if you want to plush up your Sandero include automatic air conditioning, heated front seats, a reversing camera, auto wipers and a power operated sunroof.

Expect a decent step forward in efficiency figures, thanks to this third generation Sandero model's more modern engines and lighter, more sophisticated CMF-B platform. Let's get to the WLTP figures. The base SCe 65 normally aspirated petrol variant manages 53.3mpg on the combined cycle and 120g/km of CO2. The three cylinder turbo 1.0-litre Tce 90 turbo unit we think you'll prefer can duplicate those figures. You still won't get quite as good showing as you would from a pricier mainstream supermini, but there's no doubt that Dacia has considerably closed the previous gap in efficiency that existed compared to the mainstream market. And it's useful to have the rare option of LPG power for the Tce 90 engine, should you be prepared to consider it. On to the warranty. Dacia offers an industry standard 3-year/60,000 miles guarantee from the showroom, backed by three years or 60,000 miles of roadside assistance. For a little more, you can extend the cover by two years or you can up the period covered to a Kia-equalling 7 years and 100,000 miles. Service intervals are every year or every 12,000 miles and since most Renault dealers look after Dacias too, you shouldn't be too far from a specialist workshop. It also helps that there's a timing chain that'll last as long as the engine. Dacia offers a choice of pre-paid servicing schemes covering you for either two years and 24,000 miles or three years and 36,000 miles.

This is probably the compact family hatch that many people currently choosing Fiestas, Polos and the like should actually be considering. Those mainstream superminis aren't only vastly more expensive than this Sandero; they're also significantly smaller inside too. With the previous generation version of this Dacia, those two Sandero selling points, though considerable, weren't quite enough to convince the relatively few prepared to consider it. These folk should think again. If, for you, a car is simply a functional implement, a domestic tool that, like any other, must justify its expenditure, then this one now fits the bill perfectly. Solid, spacious and family-friendly for the kind of money you'd pay for a tiny city scoot, it offers pretty much everything you need and nothing you don't. Yes, products from the established market players are still more sophisticated - but the gap isn't huge. Except, of course, when it comes to what you have to pay.